Monte Argentario is the highest promontory of the Tuscan coast, but it is much more than a "mountain" as if it were simply so, it would do reaching this title only by a few meters. This place is actually an ancient limestone island joined to the Italian peninsula by two strips of land, called "Tombolo di Giannella" and "Tombolo di Feniglia". These two 6 km long lines of ground separate the mediterranean sea from the famous Orbetello lagoon, the Italy's second one in order of environmental importance.

In this enchanted landscape there are three town centers which, though belonging to two different municipalities, form a not to be missed triangle: Orbetello, Porto Santo Stefano and Porto Ercole, all three plunged into the mediterranean rough and just next to the regional and WWF reserves issued to protect the so particular ecosystem (see for example the 'Orbetello lagoon reserve'). 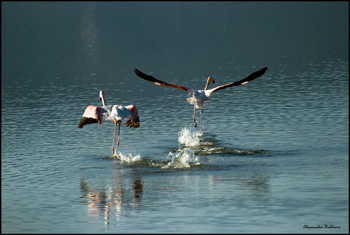 From the "Monte", as the inhabitants call it, the sight will leave you speechless. By one side it will open to the sea, the lagoon enclosed by the tomboli, the town of Orbetello and a wide stretch of the italian peninsula; by the other (perhaps glowing in the deep red of a setting sun), it reaches the islands of Isola del Giglio and Giannutri.

The town of Talamone, where the Thousand led by Garibaldi prepared the final stages of the Italian unification, stands a few kilometers further north. Offering breezes that are greatly appreciated by surfers and sailing enthusiasts, Talamone also allows a good swim and you can also take advantage of its beautiful coves where snorkelling is pleasurable.

Capalbio, perched on a hill where to have stunning sights of the courntryside and enjoy less warmer summer temperatures, rises a few kilometers south of Orbetello, by the limit between the Tuscan Maremma and Lazio. The "Little Athens", as it was called the about 4000 souls town, is well worth the few miles of curves to reach it. If you ever had a doubt about visiting, keep in mind that it also earned the first place in the Blue Guide of Legambiente-Touring Club Italiano (from year 2007) for the protection and wise management of beaches, landscape and environment. Not far, a walk in the first WWF reserve of Italy (since 1967), the Burano Lake Reserve, will certainly satiate those of you who have a 'green' soul.

But the environment is only one of the many reasons to visit Capalbio and its surroundings. It is infact a great idea to spend a few hours in the surreal Tarot Garden, designed by Niki De Saint Phalle, a space in between Alice in Wonderland and the magnificent structures of the Spanish Park Güell from Gaudi. Or again, have fun just enjoying a good swim in the crystal clear waters of Chiarone or Playa della Torba, with its dark sands.

Staying in Maremma is not that hard. Throughout the whole area, there are many accommodations within the reach of every budget. From hotels to well equipped campsites by the shores you'll most likely find something that fits your needs. You may also try one of the many farmhouses (called "agriturismo") spread all over the hills and the vast countryside: together with the more familiar Bed & Breakfast these can host you for a fair price and are usually not far from most of the points of interest you might like.

Our gallery of the Argentario surroundings

Many places are in fact easily accessible by bike, thanks to the old and new bike lanes that will take you from Orbetello to the sea shores and the coves around the whole Monte Argentario. From Orbetello you can reach Monte Argentario by a superb walk through the lagoon and with some effort you can get to the convent of the Passionisti friars or to the Telegraph Point ("Punta Telegrafo") positioned at the very top of the "monte" (although I still recommend a car to the less accustomed to long walks or bicycles).

Through the pine forest of Feniglia, either on foot or by bike, you can take advantage of the many exits along the main path to enjoy on one side the nearby beach or, by the other side, to observe the lagoon shores. The pleasant trip underneath the pines will take you in approximately 6 km to the hill where the town of Ansedonia stands, conversely, not far from Porto Ercole and its Spanish forts (Forte Stella , Forte Filippo, La Rocca). Take a bit of care if you see a few wild boars crossing your way on the distance but feel blessed if you happen to have deers around to keep you some company!

Spain and its heritage features many buildings in this corner of Tuscany: as mentioned, observation and defense towers of Porto Ercole are some fine example of spanish architecture, but also the ancient gates of Orbetello ("le porte" as the inhabitants call them) , the former armory of Guzman and many other remain as evidence of a strong spanish presence. Nonetheless Orbetello, the town over the lagoon, was awarded the role of capital of the "Stato dei Presìdi" (whose name is honored by the historical reenactment group).

Finally, if you are fond of diving, in addition to beautiful spots behind Monte Argentario, you can enjoy the popular diving areas around the islands of the Tuscan Archipelago: being quite easy even for non-experts you can have lots of fun throughout the whole year.

We are in Tuscany, home of the best italian food. If you got here because of it, no season will be a bad choice to taste and drink what Italy got famous for. Here is the place where to have healthy and completely naturally grown and cooked food: just forget aspartame, the many dips you might be used to and the "light" labeled cheese.

This is the right place for great meat and the Fiorentina cut (the T-Bone steak) produced from the maremmana cow or the famous Chianina. Here, ham is hand cut by the knife, sausages are tasty and bread is unsalted. With a few spoons of Ricotta you can make ravioli so good that's touching and a slice of pecorino cheese coming from the nearby farms should always conclude a meal. A note about the vegetables: forget those bland flavors of greenhouse produced veggies and enjoy a "pinzimonio" with the seasonal ones harvested a few meters from your feet. 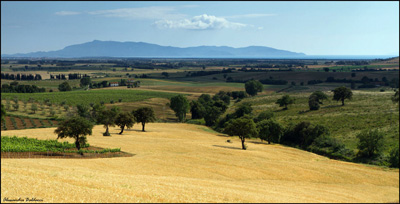 If you're up to lighter food look for a "panzanella" or find yourself fish based meals in the menu: do not forget that you are staying in place both near the sea and the hills. Having the best of both worlds is definitely possibile. The bass of the Orbetello lagoon and the sea breams are excellent on the grill sipping a glass of "Ansonica dell'Argentario", otherwise, if you're looking for something completely different try a dish of smoked eels on the grill . Even fish soups (for example, the Argentario Caldaro) deserve a special mention with a very personal advice to try the "zuppa con le femminelle" (a special "old school" soup with small crabs) if you are lucky enough to find it.

Where to eat these goodness, is not a big deal: apart from a few "touristic" places, many places will serve you great food. Just be careful of booking in advance during summertime to avoid unpleasant surprises or a midnight dinner. Moreover, Maremma hosts many feasts (called "sagre") on summer where the local folks widely participate and food is moderately priced. Just make sure you have some patience to stay in line for a few minutes waiting your turn to order dinner. These "sagre" miss some comforts and sometimes you will be bothered by background synthesizers but it might be worth saving a few euros, as the food quality is almost intact and quantity is usually enough.

The Maremma coast offers many possibilities to spend great time with friends. We have to admit it is not so crowded by night clubs and live music although the area is a great spot for skilled and widely appreciated musicians. By the way you could be surprised by some clubs hosting famous italian artists that enjoy spending the evening by playing for the fans.

The nights of Maremma are pleasurable in a way that differs from the Romagna side of the italian coasts: less disco addicted tourists (even if there are a few cool ones) and many more preferring to walk chatting amiably through the old towns streets maybe having an amazing gelato (Orbetello has many "gelaterie" from which to choose). Similarily the beautiful seafront of Porto Ercole or Porto Santo Stefano will also offer great views and a parade of gradually bigger and fancier boats that will let your jaws literally drop.

Some great movie, literature and music festivals have become an annual not to be missed appoitment in Maremma: we suggest the "Capalbio Cinema International Short Film Festival", inaugurated in 1994 by Michelangelo Antonioni himself, "Capalbio Libri" in the delightful Magenta square, or the shows of Festambiente in Rispescia that since many years now involve thousands of spectators and many stars of both Italian and international music.

Last but not least, bars (mostly with many tables out in the streets are a perfect meeting place for both tourists and inhabitants. The most popular ones can be easily spotted by the swarm of youngsters crowding outside both during summer and winter. Whether you're looking for some noisy happy company, or you're up for relaxing night out sipping a good old glass of wine with friends, the Maremma coast is the right place for you.

People in this conversation