Someone may believe that living on an island could be difficult and perhaps a little bit frustrating: if something is not there you have to ask someone to fetch it for you, if you need some new friends, well... you have to wait for the next boat or get yourself used to those 1500 friendly souls. Well, living in the big cities is all different! But then it comes the summer (a rather long one anyway), and before you know, ferries full of new faces land on the island "living room" (the lovely Giglio Porto) and by the moment they have their first foot on the ground they remain amazed by the beautiful sea and the nature of this beautiful island of the Tuscan archipelago.

Isola del Giglio is for sure astonishing in every season and, believe me, even with all the people that come visit on summer, you will have plenty of time and space to enjoy the silence of your misanthropy. Anyway, Isola del Giglio is just perfect for many different activities. Someone will enjoy diving, someone else will appreciate its environment and will love hiking, bouldering or just sunbathe in the gorgeus seashores and, of course, a hearty meal of the Tuscan tradition combined with a good glass of Ansonica in the evening will definitely help your heart beat peacefully once again..

Isola del Giglio is a hilly island at about 11 miles from the promontory of Argentario (already almost an island in itself) with a maximum altitude of 496 meters above sea level. This one is of a clear blue, almost emerald, fortunately remained intact after the tragic accident of the Costa Concordia, on January 13, 2012.

Now eroded holm forests were sprouting millennia ago to cover the rocky skin of the island. While unfortunately long periods of agriculture, breeding and fires have changed the surface of Isola del Giglio, the transition to a form of economy based on tourism is reporting the environment of the site to its original splendor. The only remains are terraced walls of granite (the so-called "GREPPE") used for the vineyards that produce the Ansonica, a certified production available with the same designation in the near Argentario Coast.

Do not think, however, that the nature of Giglio has been tamed: the dense mediterranean thicket is wild once again and ready to be explored while the great outdoors of granite blocks are a perfect opportunity for doing some bouldering and enjoythe enchanting and unique landscapes.

Anyone who reach the Island (and has not decided to land there by parachute!) will leave the ferry to set foot on the part of the Island known as Giglio Porto. This part of the town is the youngest, built in the eighteenth century by the migration of the Ligurian and Neapolitan fishermen interested in the good fishing grounds of this portion of the Tyrrhenian Sea and it is now the only point of arrival and departure from the Island.

The tourists are welcomed by a magnificient embrace coming from the port houses that follow the curved coastline shape. It is nonetheless hard to believe but the sea here is crystal clear even by the port despite the obvious nature of the surrounding area. From here, as well as enjoying a few shops and an ice cream along the pier, you can hire the boatmen for a good price and be guided to the not so far shores.

The eleventh-century castle is one of the biggest attractions for the island visitors. The high walls, the towers and the maze of alleys between the houses perched on the hill of the ancient village is truly amazing. Distant outpost of the Republic of Pisa during the period of the Maritime Republics, the castle changed owners several times throughout history: the first one was Pisa, as said, later was Florence, who's noble family loved so much the Isle to name each eldest son of the Grand Dukes of Tuscany as "Lord of the Lily" ("Giglio" means lily in italian).

Giglio Campese is the last inhabited part of the island. There you will find the finest seashores in the large bay of the north west, limited by the stack and from the ancient Medicean tower, the so called "Torre del Campese". Just from this bay, known as the most important resort area of Isola del Giglio, many enjoy the cool breezes on hot summer days while also enjoying the beautiful views offered by a fiery red sun to color the sky around Elba, Montecristo and Corsica in the farthest. 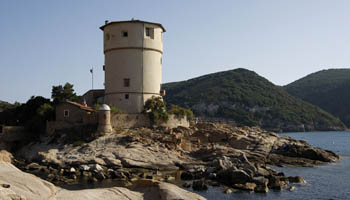 If Isola del Giglio is a gem on its own, what is submerged by its waters have an even higher value, both aesthetic and environmental. The island is a widely acclaimed destination for divers from all over Italy because of the modest commitment that diving here requires and because of the many observable rarities including the red gorgonian (about 35 meters deep) and the so-called gorgon stars.

Toremar and Maregiglio are the companies with which you can reach Isola del Giglio. By car you first reach Orbetello following the road named "Aurealia" going south if you're coming from Milano or going north if you're visit starts from Rome. Cross the dam over the lagoon of Orbetello (a real wonder itself), and follow the signs to Porto Santo Stefano: once beyond the dam it will take you only a few minutes by car before reaching the Porto Santo Stefano entrance square where to board the ferry.

It is not uncommon to take your vehicle on the island although it is not so convenient and busses on Isola del Giglio are cheap. The island is anyway quite small and you can easily visit most of its landmarks by foot. in the event you can't live a day without your car, just keep an eye on the date: for 2012, from July 30th to August 24th it requires a permit to use it there.

As an advice: watchout the ideas and projects you dream of during the short ferry trip... special places like Isola del Giglio can offer such a peace of mind that some might even decide to tear up the return ticket.