Buying a nice piece of meat like this is the first step towards the pleasure of tasting high quality meat. The first step, in fact: to properly prepare the meat, and especially the Fiorentina, is an art and as such requires some care and a little desire to practice.

Tradition has it that the name comes from the celebrations on the night of San Lorenzo and the Medici family. Florence, once being the main crossroad of Europe, it was illuminated by bonfires on those nights and the Medici family used to roast large quantities of veal meat to then distribute to the population: in one of these celebrations, it seems that travelers and English knights gave the name "beef steak" to that meat which was later italianized as "bistecca". Similarly came the word "roast beef" which is still in the italian dictionaries and its preparation that, by the way, was already known by the people of Florence of those years.

Apart from the football team or by a female friend from the tuscan capital, the Fiorentina is one of the finest cuts of meat of Chianina: a classic from the Tuscan, Italian and international cuisine. It is located in the loin, which is in the back section of the adult cattle, between the shoulder and thigh. Often, the less savvy, confuse it with the "costata" from which it differs by many reasons we will learn: at the moment let's keep in mind that the fiorentina is a stretch of back immediately following that of of the "costata". 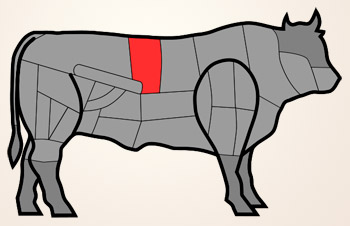 It must have a bone with a clear form of T (as you may know "T-Bone" that is) separating the fillet from the rest of the steak. The fillet, that is the main big difference between the fiorentina and the "costata". A taste, aroma and texture that otherwise would be quite similar. That together with the price.

Finally, the actual cutting: a T-Bone is usually 4-5cm high (or as sufficient to make her stand on the bone side) and it weighs between 800 grams and 1 kilogram while the costata is usually about 200-300 grams smaller.

Watchout for the calories

The fiorentina steak is a food with variable calories due to the different marbling (presence of intramuscular fat) that it may have. Keep in mind that 100 grams of fiorentina correspond to approx. 150kcal. About 30kcal less than the same amount of costata. Given the flavor that the presence of fat gives the meat in general, feel free to judge for yourself if you prefer the gentler pleasures of a costata or whether the few extra calories are worth the sacrifice.

For sure the fiorentina is not a dish to be eaten often and not only because of the cost per kilo, which by the way is not cheap: an entire steak usually weigh up to 1kg, and the amount of ingested proteins exceeds by a good span the recommended daily quota. Although a snatch to the diet might be feasible from time to time, I advise to accompany it with a side dish of fresh vegetables and some pineapple for dessert to further facilitate digestion.

The meat is produced from purebred Chianina cattle aged between 12 and 24 months and in Italy a branding mark must be provided to guarantee the product identification and origins. The marking, heat stamped by the slaughter house, must be supervised by an appointed authorized expert. If portioned packaged, the meat can be sold only in sealed packages. The packaging must happen under the control of an authorized food agency that will verify the marking on each packaging. In addition, however, any description not expressly provided is forbidden by the italian law.

One last note about the marbling: if the meat color is uniform it means that there isn't the typical fat marbling of the fiorentina and the meat will miss much of its distinctive flavor. A tip: in this case, avoid it if you can. 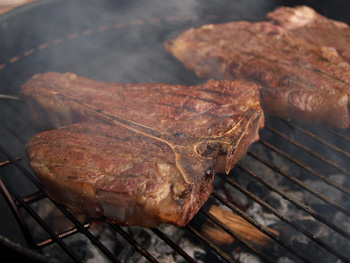 Maturation: the flavor of this cut highly depends on the long maturation, preferably not less than 15 days, needed to improve tenderness and muscle proteolysis. This is the secret that, due to the formation of polypeptides and amino acids, will let the fiorentina steak acquire its characteristic flavor. Be careful that, at least in Italy, markets usually sell meat matured for no more than 48 hours.

Time to light the coals

Finally we reached the "hot" spot of our culinary tour of Tuscany. Did you buy some coal? Ok. Do you have some good oak, chestnut or beech wood? Even better! Still a few tricks and your grill will be a sure success.

Now, take your meat out from the refrigerator and keep it at room temperature for at least a couple of hours before cooking. When the fire is very hot, put the grill on it so that it will get just as much as hot and then put your fiorentina steak on top. Take special cares not to use forks, knives or other tools that might prick the meat surface and will definitely make it less tasty and very chewy.

The optimum time to keep the meat roasting is 4-5 minutes per side so that it will produce the so-called "Maillard reaction" reason of the classic and succulent taste of roasted meat. Exactly because of this reaction (which MUST remain just on the outside of the fiorentina) you should not exceed the indicated time so that the inside of your meat will remain a deep pink color and will not exceed the internal temperature of 55-60°C (that is the famous "a puntino" italian cooking name). To properly finish your meat preparation, we recommend you to spend a few more seconds having it bone side on the grill so that even the bone will be the right colour without affecting taste.

Sauces vs No sauces

Let's end up with a special and important note: a good quality fiorentina steak needs only a few other ingredients, the less the better. A dash of salt (better if in big grains) at the end of cooking is sufficient although some combine it with a few drops of extra virgin olive oil to add a further taste of Tuscany to a dish that just by writing makes me want to have one.