Easy to be found on almost every season, the succulent meat of the "sea cicadas" (as they call them), is both an excellent addition to any fish soup or spaghetti or a super tasty dish to cook alone in a pan. Let's find out more about this food.

The vernacular names used for this crustacean are many: on the coast of Tuscany and Lazio the "Squilla mantis" (this is its scientific name) is usually called "cicala di mare" while in some port towns (many of which have historical links to Naples and Campania) is also called "pannocchia di mare" or "spernocchia". By the way, it is not so uncommon to name it "pannocchia di mare" (in english "sea corn") leaving many doubts whether we are talking of fish or a special kind of corn. 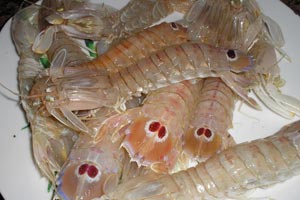 Whatever his name, sea cicadas occur anywhere with a grayish-white color, almost pearly, with two characteristic purplish-brown oval-like spots similar to eyes on its tail (which also features swimming.) This typical tail coloration, along with its armor fitted with spikes pointing towards its direction, confuses predators and is a very effective defense method for the crustacean.

The animal, usually from 12 to 20 cm long, has a first pair of limbs (the pseudo-claw) composed of two lobes serrated like those of the mantis with which it catches small preys. The head, also covered by a sturdy shell, is fitted with two pairs of antennae and two other mobile appendages, on which the eyes are placed.

The sea cicadas are quite common throughout the Mediterranean and live on sandy or muddy coast at a depth varying from 10 to 200 meters. It prefers the mouths of rivers. Being usually solitary, they live in tunnels dug into the seabed from which they only come out at night looking for food or for breeding. It is in the den that spawning takes place and the female supervises the eggs until the hatching.

The catch is easier after heavy storms that cause the destruction of nests and of course the best time period is at night, especially with bottom trawls.

Although it is almost always available throughout the year (with preference for spring, summer and early autumn), the sea cicadas meat is very tasty and has greatly valued, being it suitable for both first and second course. Forgetting not to put some of its flavor to the fish soup is a little secret that is worth keeping in mind.

It should be consumed fresh in order to avoid a rapid dehydration process that usually empties the shell almost completely. It might sound weird but as it lives long after the catch, anyone interested into some sea cicadas recipes should buy it and cook it alive. If live specimens are not available (quite common in the big cities food companies) make sure that the shell is solid and not dry, cracked or worned out with yellow spots. It should slighty smell of sea.

The sea cicadas are very delicate crustaceans, meaning that they should be consumed or frozen as soon as possible. You can keep them in the refrigerator, well covered with a plastic wrap or sealed in a freezer bag for up to 1 day. If you happen to find them alive, you can also freeze them at -18 °C making sure you tightly seal them in special bags, removing as much air as possible. You should be able to preserve them in the fridge for about 3 months without losing much of the original flavour.

The name "mantis" comes from the similarities between the pseudo-claws of this animal and the corresponding ones from the mantis, an insect hunter. This last one can move its frontmost legs reaching peaks of 23 meters per second, a speed that enables him to attain, hit and crumble the shell of its favorite prey: the snail.

People in this conversation 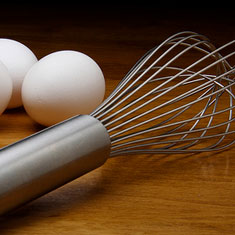