Located around the municipality of Orbetello, it covers about 800 acres, between the Argentario peninsula and the coast. Argentario is connected by two strips of land (called "tomboli"): Giannella (north) and Feniglia (south), and by an artificial dam to a narrow peninsula where the town of Orbetello lies. The brackish lagoon is about 2 meters deep at the center and a few centimeters on the shore; it benefits from fresh water inflow from the river Albegna to the north and communicates with the sea through two minor channels.

The reserve, which hosts 260 species of birds and is located along a major migratory route between Europe, Asia and Africa, consists of a coastal lagoon sprinkled at the west with small islands of silt along which thrives salicornia; by sand bars along which stands a band of Mediterranean pine forest with brushy areas and a lawn. 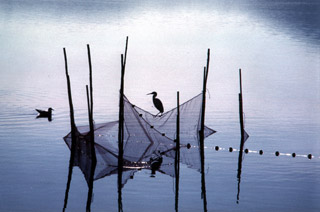 Back in 1964, the lagoon and it's ecosystem aroused the interests of Fulco Pratesi who safeguarded the so called "Knight of Italy", a bird that became the symbol of the reserve itself. A part of the reserve became State Natural Reserve in 1980 and WWF entirely took over its managament since then, organizing visits, scientific researches and environment monitoring.

Recent upgrades have been made to the lagoon water echange, to prevent fish death because of low oxygen levels. The activities involved the creation of small artificial islands (called "casse di colmata") formed by dredged materials from the bottom of the lagoon itself being inserted in a palisade perimeter. To make those areas more useable to endangered species, the European Union in collaboration with the municipality of Orbetello, the region of Tuscany, the Province of Grosseto and the National Research Council, has funded the project LIFE-Nature, with both the purpose of creating a natural habitat and maintain the islets.

The first strip of vegetation running along the lagoon features saline resistant plants such as salicornia, tamarisk and common reed. Behind this range grow the first high trees, white poplars, ash, elm, eucalyptus and cork oaks which constitute the real woods.

The Mediterranean vegetation, very compact and extending into the inner zone, consists of mastic trees, myrtles, thorns and cistus (shrub that are highly resistant to fire and so thorny that it has been used, according to legend, to plait the Jesus crown of spines).

The forest Patanella consists of cork oaks and pine trees, while the undergrowth besides the common Mediterranean scrub and gorse features an expanse of "brugo" (Northern Europe heather) and some species of orchids (Orchis palustris and Limodorum abortivum).

The Orbetello lagoon reserved can be reached by SS Aurelia, through Patanella exit at km 148. The guesthouse is located in the homonymous WWF "Casale di Giannella" along the Giannella road. Visiting is allowed from September 1 to April 30, all Thursdays and Sundays at 10 am and 2 pm. Saturdays are open to groups. School groups can get access in the remaining days, upon mandatory reservation at Casale di Giannella.

It  offers various walkways, observation posts, a guesthouse, a botanical trail and a permanent exhibition on the lagoon.